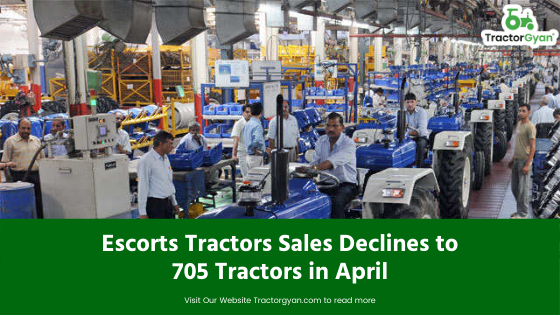 Domestic tractor sales in April 2020 was at 613 tractors against 4,986 tractors in April 2019. Sales were impacted by nationwide lockdown resulting in the closure of dealerships in most areas and for the most part of the month.

Most of the sales were recorded in the last few days of the month after the exemption of sale of Agri Machinery was announced by the Union Government on 20th April. The ground situation is expected to improve further over the next few days and weeks.

Overall rural sentiments are positive because of the well-expected output of Rabi crop and a favorable initial prediction of monsoons this year. Opening of Mandis, aggressive procurement of crops by Government, and the gradual opening of banks and NBFCs arc positive indicators for near term recovery in demand.

Going forward, we expect the tractor industry to recover faster as compared to some other sectors. Exports tractor sales for the month of April 2020 was at 92 tractors as against 278 tractors sold in April 2019.

Sales figure are as follows:

Pradhan Mantri Kisan Samman Nidhi (PM-KISAN) is a scheme with 100% funding from the Government of In...

What is DBT Agriculture? Here’s How Farmers Can Avail Benefits

Launch And Overview Of The Programme The central and state governments initiated several schemes...