The industry deals with the manufacturing of garments. It is a self-reliant industry which produces everything from raw material to the final value-added product to its customer. It has a major contribution to the economy of the nation.

The industry is basically divided into the following branches.

This specific domain of textile industry uses cotton as a raw material to produce its product. It covers a significant portion of its parent industry.

The woollen textile industry in India is partly a cottage industry and partly a factory industry. The industry uses wool of sheep as raw material and is generally located in Northern India.

India is the second-largest producer of silk after China and that important its silk textile industry, silk products also contribute significantly towards the total exports. The industry gives employment to about 55 lakh people. The specific area of silk in agriculture is known as sericulture.

These are some subdivisions of textile industries, other than these, it also has jute textiles and synthetic textiles. 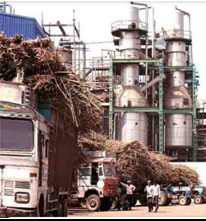 The sugar industry is the second largest agro-based industry in India. Sugarcane is the fundamental source of sugar production. The industry is active only during the harvesting months of the sugarcane.

Vegetable oil is the primary source of fat in the Indian diet. Vanaspati is a hydrogenated vegetable oil which is widely used in India. Different regions use different materials based on the technology they use. The most common raw material for this industry includes coconut, mustard, and groundnut.

Tea is a favourite beverage consumed by Indians and so is its production. Tea is mostly cultivated in Assam, West Bengal, and Kerala. The industry runs throughout the year and gives employment to about 1 million people.

Coffee is highly preferred for its blending quality. India doesn't contribute a lot in the international market in terms of its export but Indian coffee has found its own different place because of its distinct taste.

The basic raw material of this industry is hides and skins, which come from pelts of cattle and large animals and small animals like sheep and goat.

All these agro-industries are very important for our nation's economy. Also, they provide employment to a large extent. The demand from these industries also decides the profit percentage of farmers. Although various other factors are also responsible but once the final harvest is obtained all depends on the industry demand. Therefore, everything depends on each other and same is the case with agriculture and agro-based industries.