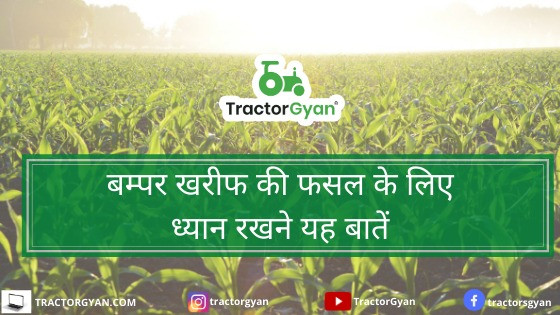 THINGS TO KEEP IN MIND FOR A BUMPER KHARIF HARVEST

Kharif crops or monsoon crops are plants like rice that are cultivated during the monsoon season. The Kharif season varies by crop and region, starting at the earliest in May and ending at the latest in January.

The increase in monsoon rainfall has created ideal conditions for agriculture for the rest of the year with accelerated planting and much more water in reservoirs, which officials said would lead to record food production this year. Rainfall in August has been 35% above normal so far, which has further improved crop planting and filled up major reservoirs with 25% more water than the 10-year average.
These crops are dependent on the quantity of rainwater as well it's timing. Too much, too little or rain at the wrong time may lay waste to the whole year's efforts. Rice is the most important Kharif crop in India.

The area sown is a critical gauge of the progress of cultivation, which depends on the availability of inputs, such as fertilizers, seeds, and pesticides, apart from the weather. A larger sown area, aided by good weather, is an early sign of ample harvests. Timely onset and a steady advance of the monsoon have resulted in increasing summer acreage.

A normal monsoon will lessen the strain on the agriculture economy from widespread disruptions caused by the Covid-19 pandemic, analysts say. Plentiful harvests are key to rural incomes and keeping the lid on inflation. Agricultural incomes push up rural demand for goods and services in the larger economy; this keeps the manufacturing going. For instance, in a good crop year, nearly half of all motorcycles are sold in rural areas, according to Citibank Research.

Agriculture has so far escaped the impact of the pandemic, largely due to sufficient rains and uninterrupted markets for seeds and fertilizers, which were exempt from the lockdown.

While the increase in crop acreage has eased the fear of a fall in grain production, the bright harvest outlook also throws a challenge to the government to deal with a situation of the abundance of produce.

With the increased supply of crops other than the foodgrain, which are procured by the government, the fall in prices can never be ruled out, which is associated with the economics of demand and supply. For farmers, it is a different story. The key issue is that a very small proportion of the produce is procured by government agencies. The bulk of the output is purchased by private players

What does it mean?